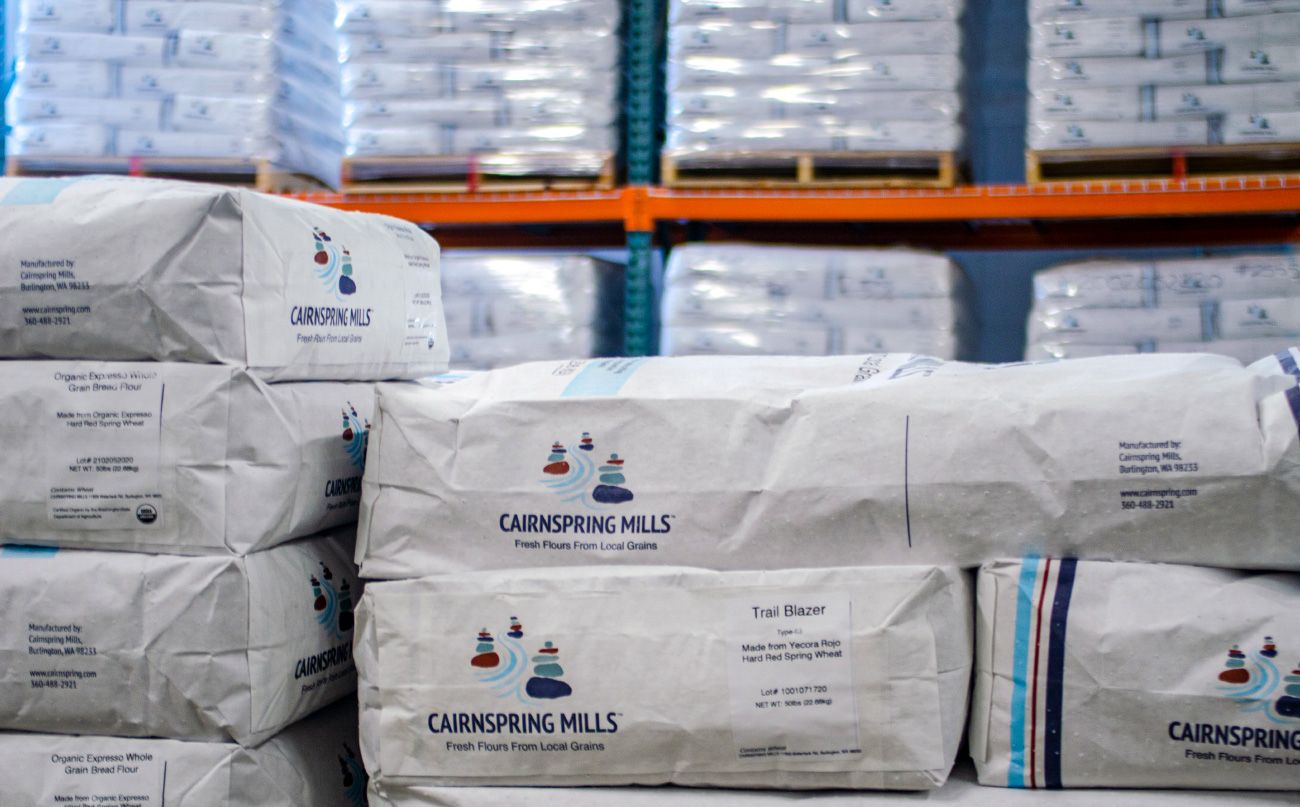 The Skagit Valley in northwestern Washington has a history of agricultural abundance. In 1891, the New York Times reported, “In this valley, sufficient foods to feed a million persons can be produced.” 1 However, as the story goes in many regions of the United States, over time, local agriculture gave way to an industrialized food system, and products like flour now ship across the country and the world.

According to Morse, wheat presented an opportunity because it had been grown in the region as a rotation crop. But to bring a crop from a low-value soil amendment to a high-value marketable item is no simple task.

The stakeholders, united by their commitment to regenerative food systems, got to work. With inspiration and advice from Tom and Sue Hunton of Camas Country Mill and other supporters and experts, the business moved quickly from a dream to a reality. Morse likens it to an “old-fashioned barn-raising,” the way the whole community came together to work on the project. Thanks to all the support, the company launched quickly, and its impact on the local and even national food landscape has rapidly expanded.

Local milling is an old concept but a new practice for the Skagit Valley, so the Cairnspring Mills team has had to learn along the way. “There’s not a lot of millers in the world,” Morse says, “or milling textbooks.” When the mill opened in 2016, they were one of just a few local mills making a comeback across the United States. Morse and his team are passionate about sharing what they have learned with others because of the business’s importance and complexity: managing supply chains, people, equipment, distribution, and sales. And because of the goal: access to healthy foods for everyone, everywhere.

Creative solutions and strong relationships have worked so far, but the team envisions a more efficient system where a granary, mill, and demonstration kitchen are all co-located. “The limiting factor here isn’t farmers that want to produce a healthier crop and get paid better for it,” Morse explains, “the limiting factor is infrastructure and distribution.” Despite these challenges, Cairnspring Mills is thriving.

Bakers are buying the stone-milled flour not only for its nutritional and taste benefits but also for the values it represents. Morse explains that the flavor stands out for many first-time consumers: “They haven’t experienced breads and pasta and pizza before with the kind of flavor they are experiencing with our flour.” The aromas, textures, and colors in foods made from these flours differ from refined flour products. But for many customers, supporting Cairnspring’s mission is a big part of their reason for buying. “People are just so happy to be able to support a local company that’s pro-farmer, that wants to take better care of the earth and the soil,” Morse says. The importance of these values, and the resulting resilience of the local system, is even more evident in light of the recent pandemic.

The path of Cairnspring Mills from idea to business was unique, informed by the locale, the community, and the people involved. Nonetheless, other grain-producing regions can benefit from the experiences of these millers.”It starts with the farmer, and it starts with the wheat,” Morse says. The starting point was to examine the supply chain and identify successful wheat varieties, which gave the team a solid footing from which to draw in farmers and funding partners. A land grant university or a cooperative extension, for instance, can be an invaluable source of information and ongoing education. Morse also recommends working with bakers and other future customers to learn what the market is ready for. Once the partners, the product, and the supply and infrastructure to manage it are in place, he says, “it’s kind of like jazz; you just got to riff on it and start playing.” Kevin Morse Interview 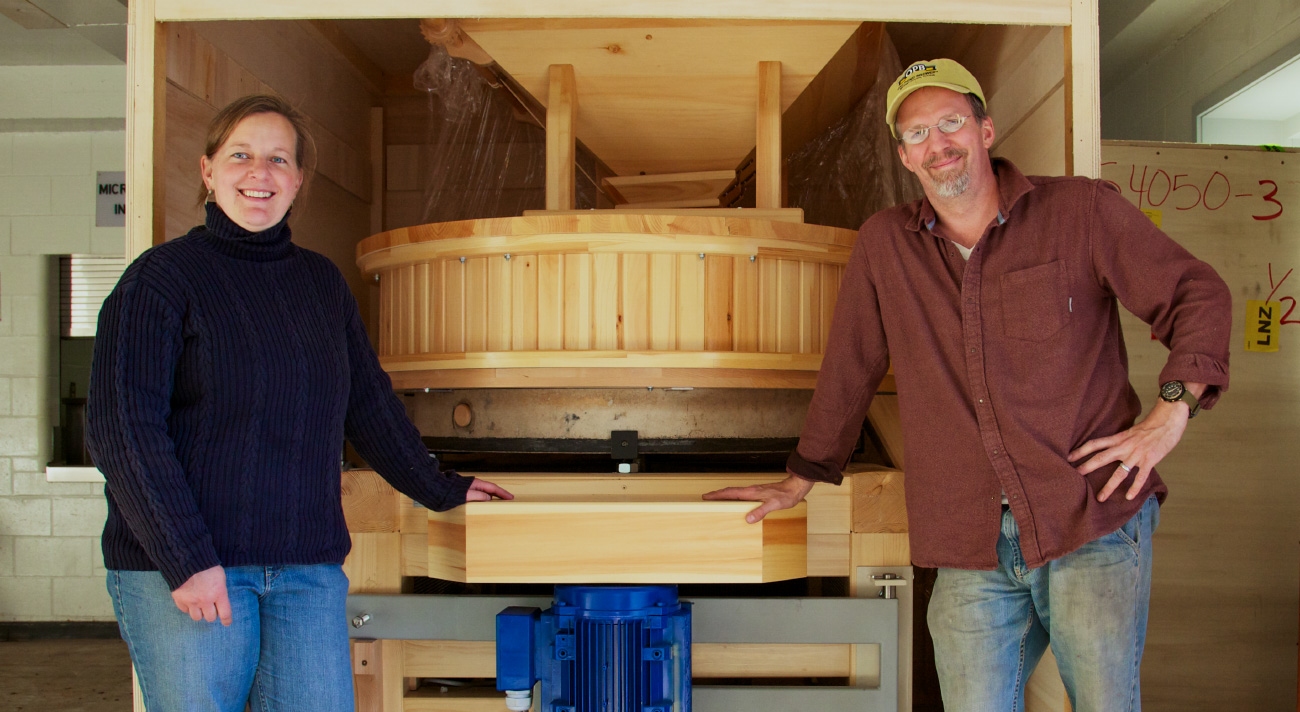 Before Cairnspring Mills was even a dream, a group of passionate bakers and community builders were gathering to address the demand for locally-grown grains. In 2007 they held the first Kneading Conference in Skowhegan, Maine to bring together farmers, bakers, millers, and oven-makers to discuss how to revive a local grain economy.2 From that place of intention, business partners Amber Lambke and Michael Scholz decided to start a mill to fill the need for grain processing infrastructure in the region.

In 2009, they converted the former Somerset County Jail building into a grist mill at the center of downtown Skowhegan – a town struggling with high rates of poverty and food insecurity. By locating the centerpiece of the new Maine grain economy here, Maine Grains invested in the town and its potential for future food enterprises.

After five years of research and business development, including training in Kansas at the only milling school in the country, the mill opened for business in 2012. Behind the scenes of this opening, however, were the farmers whose shift towards growing organic grains made the local mill possible. In a presentation at the 2021 Kneading Conference, Lambke points to Henry Perkins in Albion, Maine as one of the first farmers to sell wheat to Maine Grains.  Others had already been sowing oats and buckwheat as cover crops and were glad to sell those grains to the mill. With research from the University of Maine Cooperative Extension services and expertise from the farmers themselves, the supply chain improved over time to include a diverse array of grains adapted to the northeast climate. One of the newest collaborations is cornmeal milled from corn grown by Liberation Farms, a project of the Somali-Bantu Association of Maine designed to empower new American farmers.

The expansion of the mill has had a positive effect on the local economy. Beyond drawing food tourism to the area, Maine Grains also employs workers from the formerly productive paper industry and pays farmers a price equivalent to the true cost of growing organic grains. These efforts exemplify the company’s emphasis on putting relationships within the grain chain at the forefront of the business – a key to their success.

As Maine Grains has grown, the Maine Grain Alliance has continued to play an important role in supporting the surrounding grain network through education and funding. By providing technical assistance grants to farmers, millers, bakers, and brewers, the Alliance smooths the path for new and growing businesses. They offer workshops and conferences like the annual Kneading Conference in order to bring the local grain community together and invite growth, collaboration, and innovation across the network.

Like Cairnspring Mills, Maine Grains is now a successful for-profit business, but the real achievement of both enterprises lies in the way that success has positively affected their respective surroundings, economies, and communities. 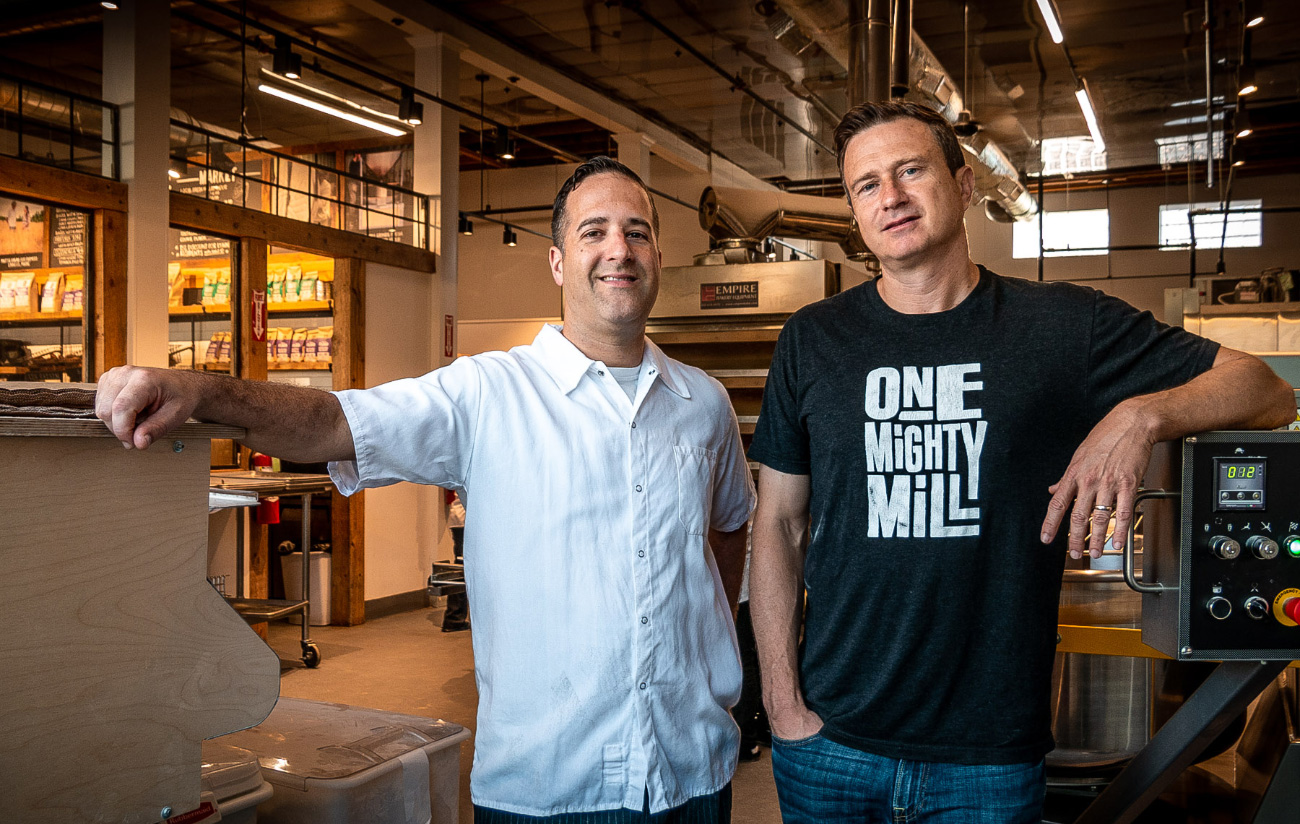 One Mighty Mill’s mission is bringing back “wheat you can eat” and making healthier and better-tasting foods from fresh-milled, sustainably sourced wheat. To us, that means going back to the way wheat was grown and milled before the industrial revolution when food systems were healthy, local, and a lot simpler. So, we’ve created a local food system that preserves as much of wheat’s nutrients as possible and allows us to produce the wholesome flour and baked goods that we all deserve.

We started with a farm and farmers who wanted to grow healthy wheat again -without pesticides and with sustainable crop rotations that build strong soil. Aurora Farms and Mill are harvesting hundreds of acres of transitional organic wheat for us in Linneus, Maine. Then, we built our first mill so we could stone-grind our wheat into the fresh, nutritious, flavorful flour that goes into each one of our delicious products. We set up the mill and our flagship bakery in Lynn, Massachusetts, a community we’re hoping to help revitalize.

One Mighty Mill’s mission is to bring back the local food systems that help our communities be healthy and thrive. And fulfilling it means we are committed to
1) Healthier Food: Healthier Food: We make real, unprocessed, nutritious products that make people healthier.
2) Healthier Farms: We build direct relationships with local, family farms that restore financial and ecological sustainability for farmers.
3) Healthier Neighborhoods: We build our mills in distressed communities to help revitalize local economies and inspire food security for our neighbors.

Specifically, we intentionally selected Lynn, MA, for our first mill. It’s a city that we’re hoping to help revitalize and we’re located in a neighborhood that struggles with food security. At ourmill’s cafe and market, we offer Lynn residents a 15% discount that makes our signature, nutrient-rich product a cheaper alternative to Dunkin’ Donuts. Meanwhile, we produce thousands of bagels and tortillas every day for Public Schools in Boston.