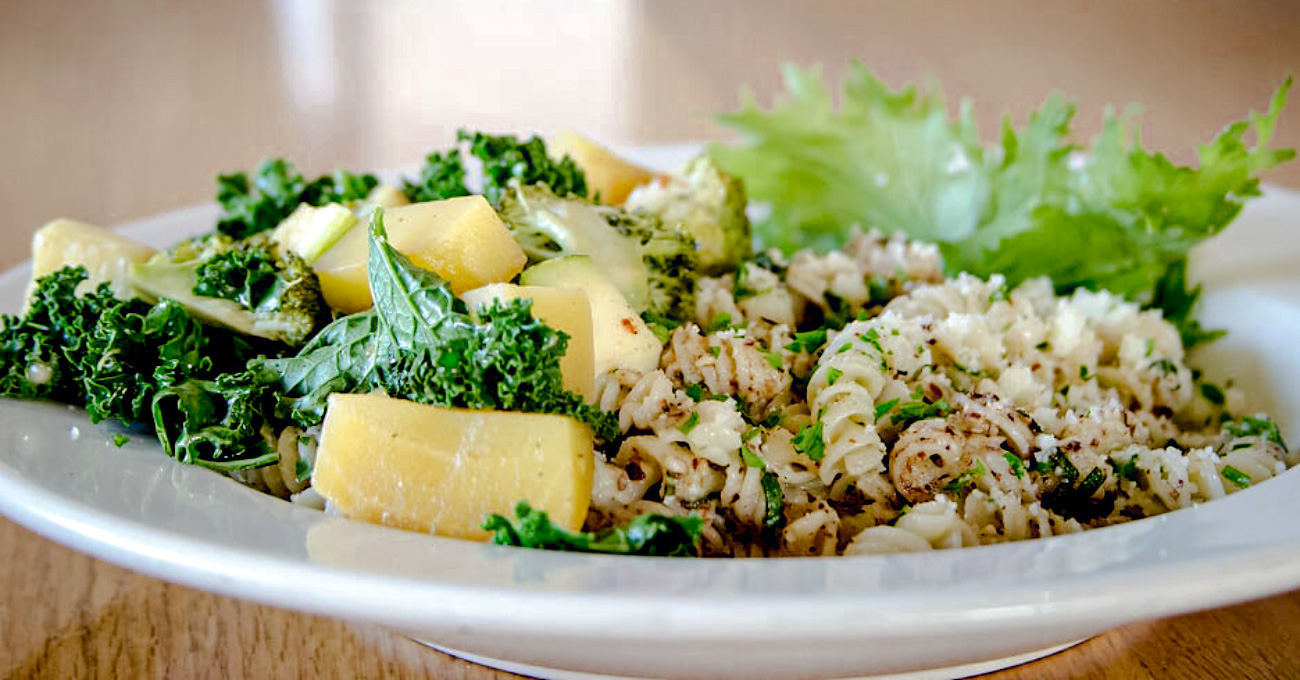 Americans consume approximately twenty pounds of pasta per person per year1. Pasta, or noodles, is central to many of the world’s cuisines because it adapts to various grains, pairs well with an endless selection of sauces, seasonings, and leftovers, and is a shelf-stable, low-cost, nourishing, and easily prepared staple.

Most pasta contains durum wheat milled and refined into semolina. Semolina is ideal for pasta because it is a coarser, harder, and higher protein than all-purpose flour.2 The boxed pasta you commonly see on grocery store shelves is made by mixing semolina and water. After kneading the resulting dough it is laminated (squeezed through rollers), sent through an extruder (to determine pasta shape), and dried.3 Whole grain pasta, usually made from unrefined durum wheat, is nutritionally superior but differs in taste from its refined counterpart. Since the early 2000s, pasta makers experimenting with wheat varieties and non-wheat grains have reported a boost in sales. 4 This is significant because a love of pasta presents a golden opportunity to improve nutrition by encouraging the consumption of whole-grain pasta.

REFINED VS. WHOLE WHEAT PASTA: NUTRITION AND SENSORY PROPERTIES
Whole grain pasta contains the bran and germ of the grain, so it is higher in fiber, micronutrients, and antioxidants than refined grains. As with bread, the bran and germ particles can negatively affect pasta properties. Wheat pasta, like bread, must develop a gluten matrix to achieve its desired shape. The bran and germ can disrupt the gluten matrix, resulting in a weaker and less cohesive pasta.5 Researchers found that as the whole grain content of pasta increases, bitterness also increases, presumably due to acids in the bran and germ that have antioxidant properties.6 They also found that the roughness and graininess of the pasta increased.7 However, to claim that whole wheat pasta is far superior in nutrition and refined wheat pasta is far superior in taste over-simplifies a complex set of factors.

Denise Webb, Ph.D., RD (who received funding from Barilla America for her article) reminds us that not all refined grains have the same impact on our digestive system: all pasta, including refined pasta, have a low-to-medium glycemic index, which generally means that pasta digestion is a relatively slow process resulting in a slower insulin release.8 This is due to the arrangement of proteins and starches in pasta. Webb also notes that refined pasta, paired with tomato sauces, olive oil, legumes, lean meat, or vegetables, has long been a staple of the Mediterranean diet, a diet pattern associated with reduced chronic disease risk.9 In the United States, dried refined pasta enrichments can include iron, riboflavin, thiamin, and folic acid.10 These micronutrients, except for folic acid, are naturally occurring in whole-grain pasta. Whole-grain pasta has the added benefit of fiber: A cup of cooked pasta (ab0ut 2 oz.) equals roughly a quarter of the daily recommended fiber intake.11 In one study of overweight participants, whole-grain pasta made people feel fuller compared to refined grain pasta, but it did not result in the consumption of fewer calories.12 So, while refined grain pasta does not deserve to be discounted as part of a healthy diet, swapping in whole-grain pasta is an easy and impactful way to meet fiber and whole-grain goals.