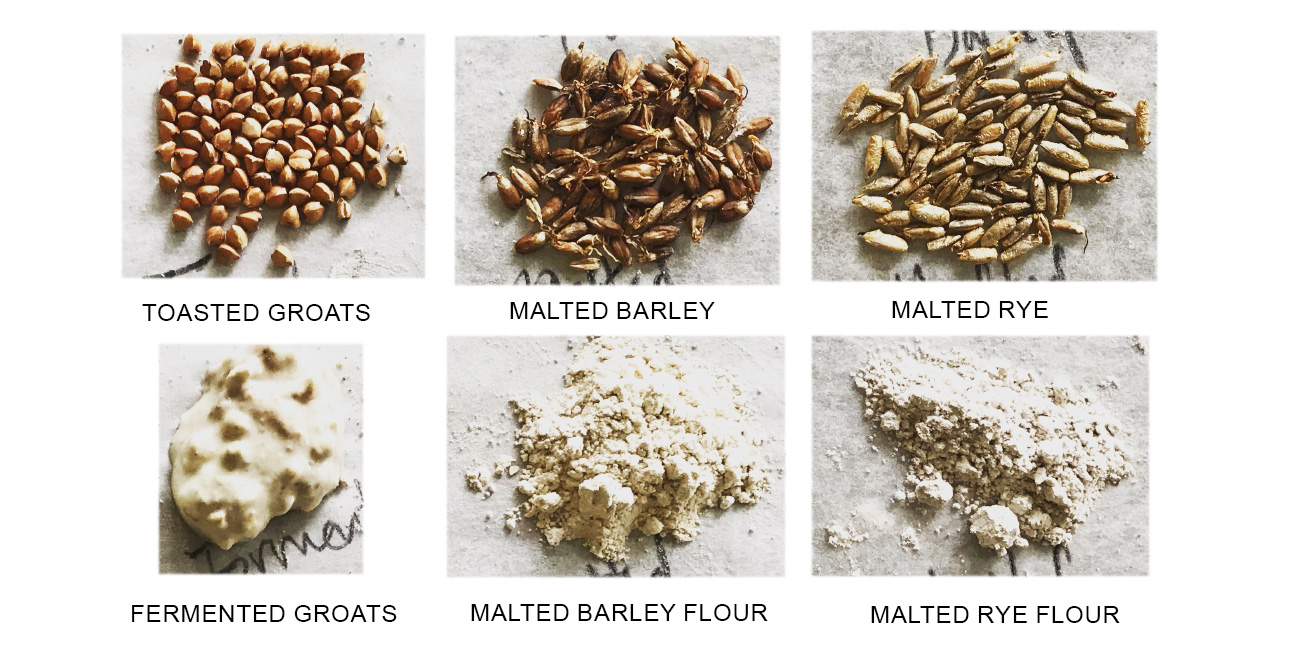 Baking and Cooking with Grains other than Wheat

Our Grain Guide primarily centers on wheat, the most common food grain grown in the United States and the most popular for breads, pasta, and pastries. But wheat is one among a diversity of grains, each with a unique flavor, a best use, and a rich cultural history. Below, you will find excerpts from our conversations with expert chefs about their experiences and formulas for creating delicious meals, baked goods, and side dishes using some of these grains.

“Everywhere I go people are using different grains: in the high Andes they use a lot of quinoa, but in Amazonia, Mexico, and Guatemala they use mostly corn. But then I came to America, and I realized that they’re using a lot of wild rice, a lot of corn, but also, occasionally, amaranth, and it’s delicious.”

Sean Sherman, Indigenous chef, restaurateur, and author of The Sioux Chef, speaks of the historical and cultural significance of corn and wild rice grown by Indigenous groups in North America.  Sean Sherman Interview

Ana Sortun describes the rich texture and flavor of three grains – farro, bulgur, and grano – that she uses in Mediterranean-style recipes at Oleana, her restaurant in Cambridge, MA. Ana Sortun Interview.

“Whole grains add a level of complexity and satiety. They tend to be nutty and earthy, and absorb flavors of whatever sauce you simmer them in” – Ana Sortun, Executive Chef and Co-owner of Oleana Restaurant, Cambridge, MA

Sprouted wheat is an increasingly familiar addition to whole-grain breads. Sprouting, or germination, refers to how grain kernels, when exposed to water, form a short sprout originating in the germ. The USDA defines sprouted whole grains as kernels with a sprout no longer than the kernel’s length and containing the original bran, germ, and endosperm. The sprouted grain can be cooked and consumed as an intact grain, or it can be dehydrated and ground into whole-grain flour. Sprouting grains can be an excellent way to improve the acceptance of whole grains among some consumers because they tend to have a milder flavor and a less fibrous texture, thus resembling refined flour.

History and appeal
Sprouted grains have been around for centuries, sometimes intentionally and sometimes not. When farmers stored their grains, occasionally they were exposed to water, resulting in the formation of tiny sprouts.1 Sprouts are said to have been prescribed by ancient Chinese physicians and used by 16th-century pirates to prevent scurvy.2

The technique has recently enjoyed renewed interest due to consumer demands for minimally processed and additive-free foods.3 Indeed, data from 2006 to 2016 show a steady increase in the market and production of sprouted grain products.4 Pagand and colleagues (2017) summarize the phenomenon: “Sprouted grains are very much in line with what today’s consumers are looking for, i.e., ingredients perceived as natural, nutritious, and healthy.” Sprouted grains are also becoming more popular with chefs and bakers, as they lend an earthy and nutty flavor, have unique baking properties, and require a shorter cooking time.5

The science of sprouting and its impact on nutrition
Before sprouting, the kernel is  dormant, but once exposed to water and the proper environmental conditions, it can start to “wake up.” 6 Over time, metabolic processes re-ignite, and the seed begins to sprout.7 During seedling development, enzymatic activity in the kernel breaks down starch into smaller sugars (hence, its sweet taste), which may improve digestion.8 Enzymes also break some proteins into amino acids; germinated whole grains contain higher quantities of essential amino acids, which participate in protein production in the human body.9 An increase in antioxidants occurs, including beta-carotene, vitamin C, and tocopherols, heightening the nutritional benefit.10 However, the nutrition gained from germination varies depending on germination time and type of grain.

Phytate, the storage form of phosphorous in many plants, inhibits the absorption of essential minerals, including zinc, iron, calcium, magnesium, manganese, and copper, in the human body.11 Since we do not have sufficient enzymes to break down phytate in our bodies, it poses a significant threat to micronutrient status, especially in communities that rely on grains for important nutrition.12 Phytates concentrate most heavily in the bran, which reveals a dilemma: we encourage people to eat bran to access other non-phytate-related nutritional benefits.13 Fortunately, soaking and sprouting activates phytases, enzymes that break down these problematic phytates, so this is an excellent way to decrease phytate levels and increase the availability of minerals to the human body.14

Another notable change during germination is gamma-aminobutyric acid (GABA) synthesis. GABA is an inhibitory neurotransmitter in the brain and has an antihypertensive and diuretic effect.15 The marked increase of GABA in germinated grains has been documented extensively in brown rice. Sprouted brown rice is associated with antihypertensive, antihyperlipidemic, and chemoprotective properties.16 GABA, in combination with other compounds such as fiber, gamma-oryzanol, and antioxidants, is proposed to be responsible for these health benefits, but more research is needed.17

The chemical changes that occur during germination have optimistic promise for human health. However, there is still a need for further scientific research to conclude that the human body can fully reap these benefits.18 Multiple authors have called into question whether or not the “health halo” attached to sprouted grains is valid. Research on sprouted grains, conducted on different types of grains in varying conditions, creates a challenge in comparing outcomes across studies. Research on digestion is limited because it has been shown either in vitro or among rats.19 Given that phytate is widely recognized to impair mineral absorption in humans, it is probable that germination results in improved mineral absorption, but there is still a need for clinical trials to confirm this.20 Recent research has also demonstrated that phytate may have chemoprotective and antioxidant properties, so it is possible that deciding not to sprout grains could also have health benefits.21

The nutrition science behind grain sprouting is complicated, and there is still much more to learn. At the very least, sprouting does not cause harm when accomplished in a controlled environment, and, for some people, sprouted grains may be more digestible than unsprouted grains.

Baking with sprouted whole wheat flour
Due to the increased enzymatic activity brought about by sprouting, bakers need to make some adaptations when using sprouted flour. Baker Peter Reinhart explained the advantages of baking with whole wheat sprouted flour at the 2014 Whole Grains Breaking Barriers Conference presented by the Whole Grains Council and Oldways (click here for his full instructive video). He says that, unlike other whole wheat flours, sprouted whole wheat flour lends a lightness without the bitterness sometimes associated with whole grains. Reinhart explains that sprouted wheat dough requires a shorter fermentation time because sprouting has already kickstarted that process. He bakes his sprouted grain bread with high hydration of 90% or higher. However, research shows that sprouted wheat flour absorbs less water than regular whole wheat flour, presumably because the starch and proteins have broken down during the germination process.22 Scientific research explains other important baking considerations. The greater free amino acid content in sprouted flour allows for a darker crust through the Malliard reaction or browning. Gluten formation is also impaired, as these proteins partially break down during germination, so the enzymatic activity can result in a wet, sticky crumb.23

However, there are some unique and desirable baking properties conferred by sprouting. For example, alpha-amylase levels increase as a result of sprouting, breaking down starches into fermentable sugars, which means that the yeast in bread dough has more to work with, resulting in a gassier, taller dough.24 Sprouted grain breads tend to be softer and have superior shelf stability.25 In fact, some amylases are intentionally added in commercial baking to improve bread height and shelf stability.26

Sprouting grains at home: Grains should sprout for at least three days to maximize their nutrition.27 The Grains and Legumes Nutrition Council (based in Australia) provides succinct instructions:

Once prepared, you can use them as you would ordinarily use grains – such as sprouted brown rice in a stir fry or sprouted quinoa in a salad.

You can find more tips on sprouting grains and legumes in this video, and you can find video instructions on how to make freshly milled sprouted flour here.

[4] Pagand et al., “The Magic and Challenges of Sprouted Grains.”

[20] Pagand et al., “The Magic and Challenges of Sprouted Grains.”