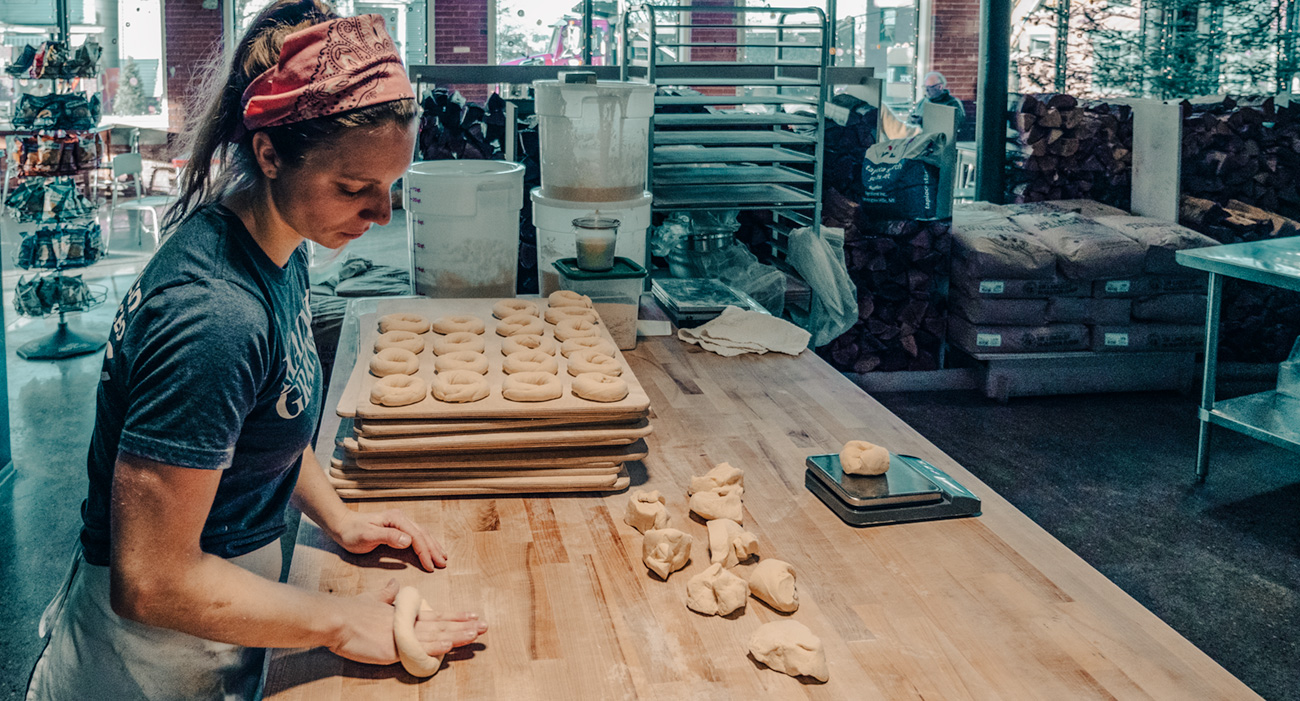 The Flavor of New England Grains

Early colonists from England, Holland, and other European countries arriving in the New World discovered unfamiliar grains such as amaranth and corn. However, the wheat and rye needed for their traditional breads did not exist and were initially available only as imports from the old world. The challenges continued: in New England, the strange soils and unfamiliar weather frustrated attempts to cultivate the imported seeds. At first, to compensate, colonial bakers purchased grains from southern settlements along the Atlantic coast1. Eventually, immigrants discovered wheat varieties that produced satisfactory yields in their new homeland.

Over the centuries, planting wheat and other grains became a traditional practice in many New England states. Kristina Razon’s Guide to Northeast Grains (2017) includes information and recipes for buckwheat, einkorn, emmer, rye, spelt, triticale, and wheat. Today, many New England farmers add grains to their crop rotations to improve soil quality and endorse the importance of grains for human and environmental health. (link) The following chart can help direct you to a wide variety of grains available in New England. It is becoming easier to learn about local grain varieties in other regions by contacting mill owners, farmers at the farmers’ markets, and university extension services. We’ve added notes about flavor and suggestions on how you might use these grains, and we encourage you to experiment with the varieties grown by farmers near you!

Grain: Barley
Flavor: “A slightly malty character and a mild nutty sweetness”2
Cooking Applications: When cooked, its chewiness and firmness work well in salads, stews, and as a base for soups, grain bowls, etc.
Baking Applications: King Arthur Flour found that barley flour works best with quick breads and pancakes.

Grain: Corn (usually considered a vegetable when fresh; a grain when dry) 4. See here for corn varieties.
Flavor: Sweet and buttery
Cooking Applications: Nixtamalized corn (corn soaked in an alkaline solution) is a staple ingredient in Mexican foods including tortillas. Dishes made with milled corn are also staples in the United States (i.e., grits) and Europe (i.e., polenta).5
Baking Applications: Before baking, it is important to choose the correct milled product. Determine if you need masa harina (nixtamalized milled corn frequently used for tortillas), cornmeal (coarsely ground, feels gritty), or corn flour (finely ground).6 Cornmeal and corn flour can be used interchangeably in recipes like quick breads and cakes, depending on desired texture.

Grain: Millet: Millet has gained popularity in the West because its gluten-free and boasts high protein, fiber, and antioxidant contents
Flavor: “Millets are warm and buttery…teff has a slightly sweet taste with undertones of cocoa and hazelnut”7; “corn-like”8
Cooking Applications: Millet is a staple ingredient in traditional flatbreads, porridges, and fermented drinks in India, Africa, and Eastern Europe.9
Baking Applications: Millet flour, another gluten-free option, was found to work best in muffins and quick breads by King Arthur Flour.

Oats: Oats (rolled and steel-cut oats are both whole grain but are produced differently and the latter takes longer to cook)
Flavor: “Sweet and mild, with steel-cut having a nuttier taste”10
Cooking Applications: Oatmeal is popular for breakfast in the United States, and steel cut oats have a chewy texture that benefits risotto-style dishes.11
Baking Applications: Oats are naturally gluten-free, but cross contamination with gluten is likely unless clearly specified as gluten-free on the label. According to Bob’s Red Mill, “oat flour can be used to replace up to 20% of the flour in most baked goods for unique flavor and increased nutrition”12

Grain: Rice (click here see the different kinds of whole grain rice, courtesy of the Whole Grains Council)
Flavor: “Rice has a neutral, toasty flavor with hints of caramel,” though each rice variety has unique flavor subtleties13
Cooking Applications: An estimated one half of the world’s population consumes rice as a staple food, so it is a component in a variety of traditional dishes.
Baking Applications: Rice flour is a popular gluten-free alternative in baking, though not all rice flour is made from the whole grain. According to Bob’s Red Mill, brown rice flour imparts a “glutinous” quality (meaning sticky, not containing gluten), allowing for its use as a thickener in sauces and making it a useful component in gluten-free bread mixes.14

Grain: Sorgum
Flavor: “Mild, earthy”20
Cooking Applications: Also known as jowar, it is consumed in Indian stir-fries and flatbreads like jowar upma and jowar roti. It can also be used in grain salads, pilafs, and can be popped like popcorn.
Baking Applications: Sorghum is gluten-free but has been called the most “wheat-like gluten-free flour” due to its taste, protein content, and ability to help baked goods brown.21

Grain: Spelt (an ancient wheat variety)
Flavor: “Has a nutty, complex flavor that’s sweeter and lighter than that of whole wheat”22
Cooking Applications: Spelt berries can be used in pilafs and grain salads.
Baking Applications: Baking with spelt flour is one of pastry chef Maura Kilpatrick’s [link to interview] favorite ways to integrate whole grains into her baked goods due to the sweetness and lightness it lends. Note that for baked goods requiring stronger structures, spelt has different proteins than conventional wheat resulting in weaker gluten.23

Grain: Triticale (wheat and rye cross)
Flavor: “Nutty and somewhat sweet”24
Cooking Applications: Same uses as other wheat berries, but it is a larger and longer grain.
Baking Applications: Triticale flour has higher protein content than wheat flour, but has inferior gluten strength, resulting in weak doughs; therefore, it should be used in combination with wheat flour.25

Grain: Wheat
Flavor: “Nutty and somewhat sweet”26
Cooking Applications: Wheat berries can be used to make pilafs, grain salads, side dishes, or serve as a bed for a saucy dish. They can also be used in sweet breakfast dishes. They are a primary grain for quick bread recipes and pastries.
Baking Applications: There are six classes of wheat grown in the United States, classified by color, seasonality, and protein content–hard and soft(“hard” meaning high protein content; “soft” meaning lower protein content). U.S. Wheat Associates identifies where each class is grown, and their optimal end uses here.