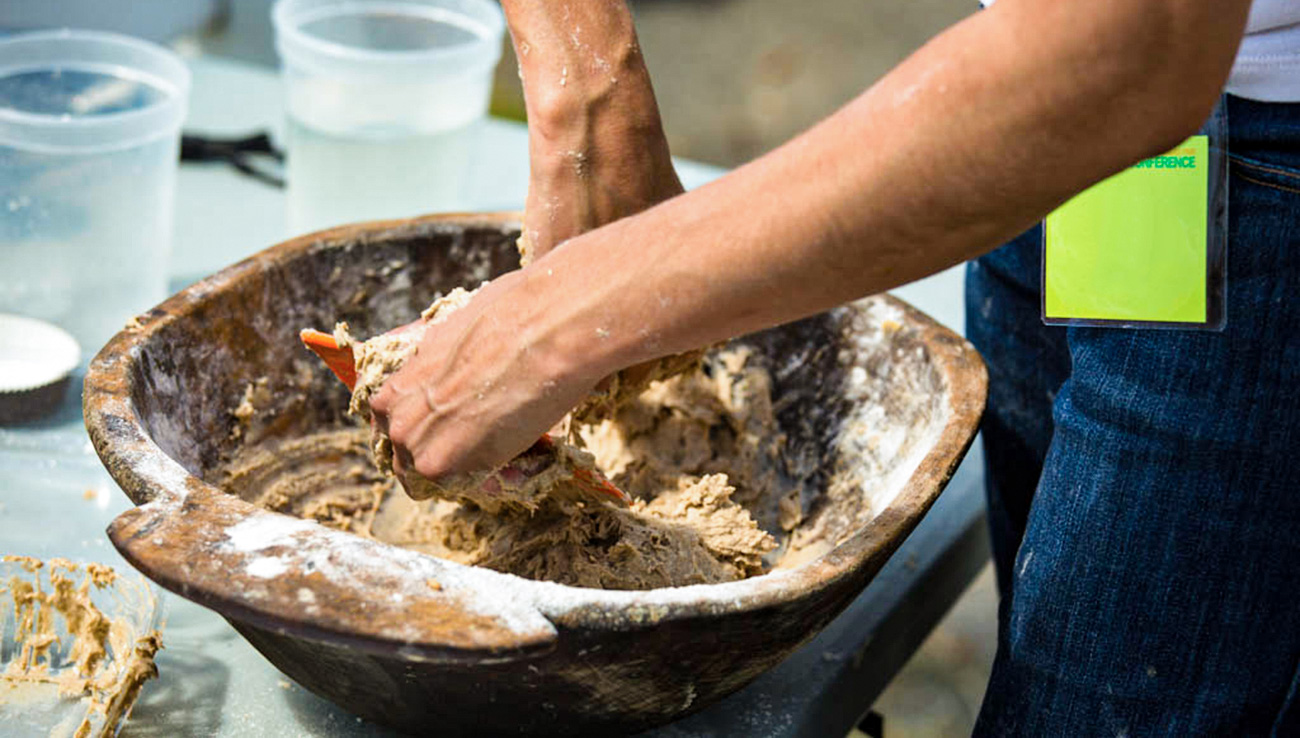 Gluten is a protein found in wheat, barley, and rye. When mixing wheat flour with liquid, gluten proteins form a network that helps retain the structure required for many wheat products. Gluten gives ramen noodles their bounce and sourdough its soft chewiness. The endosperm of wheat, barley, and rye contains the proteins glutenin and gliadin, forming gluten. Many whole grains don’t contain gluten, such as brown rice, buckwheat, teff, quinoa, wild rice, sorghum, millets, and oats (the gluten in oats does not cause the same immune response as wheat so gluten-free diets can include oats processed in a gluten-free environment!) 1

How Is Gluten Formed?
Casually mixing water and flour doesn’t necessarily form gluten. First, you need the correct type of flour with glutenin and gliadin proteins; then, you must establish the correct water-to-flour ratio. We won’t get too technical about the water-to-flour balance here, but we highly recommend On Food and Cooking by Harold McGee if you want more details.

In short, when you add the right amount of water to the correct type of flour, starch molecules expand, glutenin and gliadin connect through hydrogen bonds (the hydration process), and disulfide cross-links. These bonds enable the dough to spring back when stretched and create the gluten’s “network of bonds.” Gliadin prevents some glutenin from bonding, making it possible for bakers to shape the dough into loaves.2

What Affects the Formation of Gluten?
Mixing. You probably would not like your muffin as chewy as your sourdough, so you repeatedly knead the dough for bread or noodles but gently mix the muffin batter. The more the dough or batter is kneaded, the more bonds will form between the glutenin and starch molecules.3 The gluten network becomes more robust, and the dough becomes stiffer. This stronger gluten network might be necessary to maintain the shape of high-hydration doughs. Counterintuitively, no-knead bread also is a way to develop good gluten. When you mix all the ingredients and let the mixture rest at room temperature for a prolonged period (12 to 24 hours), the long fermentation produces carbon dioxide, which expands in the dough and facilitates gluten formation.4

On the other hand, overmixing could mechanically destroy the gluten network, which can happen if you knead the dough for too long or over-ferment the dough, resulting in an over-proofed, flat loaf of bread.3

Ingredients Other than Flour, Water, and Yeast. Adding a small amount of salt to a dough (about 1.5-2% of the total flour weight) can facilitate gluten formation.4 A small amount of sugar can encourage the fermentation process of the yeast. When used in larger quantities, sugar attaches to water molecules before glutenin and gliadin proteins can grab them, preventing the hydration of the flour (or the forming of the hydrogen bonds between protein molecules), resulting in a moist and soft dough. Fats from milk, egg, oil, or butter make the bond between molecules harder to form, so shorter gluten chains develop, resulting in soft crusts and plush crumbs.

People with a wheat allergy could have an allergic response to wheat, while people with celiac disease could experience intestinal damage from eating gluten. Only 1-2% of people have celiac disease,5 and 0.1-0.3% of people have a wheat allergy.6 An unknown proportion of the population might have non-celiac gluten sensitivity, often concurrent with other autoimmune diseases such as Crohn’s disease or irritable bowel syndrome (IBS).7 These people are not allergic to gluten or wheat but eating a gluten-free diet may omit additives or other ingredients that lessen their gastrointestinal symptoms. Data is limited on the prevalence and pathophysiology of this condition because diagnosis derives from self-reported symptom complaints.

In contrast, the symptoms of non-celiac gluten sensitivity usually closely resemble those of other medical conditions. If you think you experience symptoms specifically from eating gluten, you might consult a physician or dietitian before self-diagnosing gluten-related conditions.

The Emerging Market of Gluten-free Products & Consumer Perception Towards Gluten

The Gluten-free Market. Gluten-free diets have gained popularity among the general public in recent years. Globally, the market share of gluten-free consumer packaged goods rose from $11 billion in 20158 to $21.61 billion in 2019.9 According to the National Health and Nutrition Examination Surveys, the number of Americans without celiac disease who avoided gluten tripled from 2010 to 2014.10

The Mayo Clinic advises patients with celiac disease and wheat allergy to avoid all foods and drinks containing the following:

Consumer Perception. According to Dr. Robert H. Shmerling, M.D., “While many people in the Consumer Reports survey thought gluten-free diets were more nutritious and contained more minerals and vitamins than conventional foods, the opposite is often true. Gluten-free foods are commonly less fortified with folic acid, iron, and other nutrients than regular, gluten-containing foods. And gluten-free foods tend to have less fiber and more sugar and fat.” You can read more about the pros and cons of following a gluten-free diet here.

Is Gluten Harmful to You?
Gluten is unlikely to be a concern if you do not have a wheat allergy, celiac disease, gluten intolerance, or other autoimmune diseases.

Gluten Myth #1: The fermentation process of artisan breads digests gluten, so you should always buy artisan breads.
The long fermentation process can partially degrade gluten, improving digestibility for gluten-sensitive people. 11 But the gluten levels in sourdough breads would still be too high for celiac patients to consume.12 Gluten is the network formed by glutenin and gliadin. During the fermentation process, some glutenins become partially hydrolyzed, and some are degraded, but gliadin, the protein that is most responsible for triggering an immune response, is degraded to a lesser extent.12 Some wheat breeders propose that artisan breads do not contain chemicals, unlike shelf-stable industrialized breads, and it’s the lack of chemical toxicity that makes artisan breads more digestible, but more research is needed to confirm this.  Of course, it always depends on the type of flour and other ingredients used to determine which product is best for you. It is essential to consult with a medical professional or dietician before consuming these foods if you experience gluten sensitivity.

Gluten Myth #2: I removed gluten-containing products from my diet, and I feel much better, so gluten is the culprit of my previous symptoms.
Dietitians often use elimination diets to figure out what triggers gastrointestinal (GI) symptoms because it could be any of a wide range of causes. It is important to work with a dietitian to resolve any issues since arbitrary elimination could be inefficient or inaccurate and cause microbiome imbalance.

Other ingredients in gluten-containing food might be the culprit that triggers symptoms. One study tested the effect of gluten and fructan on people who self-reported gluten sensitivity.13 Participants followed a gluten-free diet for at least six months before consuming 5.7g gluten, 2.1g fructans, or a placebo. The people who experienced the most severe gastrointestinal symptoms were in the fructan group, while the symptoms experienced in the gluten and placebo groups were similar and less intense. Understanding how your body responds to different ingredients will help determine if gluten is the culprit behind GI issues.

Gluten Myth #3: Humans cannot completely digest gluten, so we should avoid it.
Unlike other dietary proteins, gluten is resistant to protein-digesting enzymes due to its high proline and glutamine content, so we cannot wholly digest gluten. Undigested gluten monomers could trigger an immune response and increase intestine permeability for celiac and non-celiac patients alike.14 15 16 However, we live in a world dominated by microbes, and we constantly ingest microorganisms that activate our immune system without causing adverse effects.

[2] Harold McGee, On Food and Cooking: The Science and Lore of the Kitchen (Simon and Schuster, 2007).

[4] “What Is Gluten? The Science Behind Great Dough,” Serious Eats, accessed August 26, 2021, https://www.seriouseats.com/what-is-gluten-free-bread-dough-pasta.

[17] Oldways, Why Is Celiac Disease on the Rise? – Alessio Fasano, accessed August 26, 2021, https://www.youtube.com/watch?v=uWTfCjGCQkU.